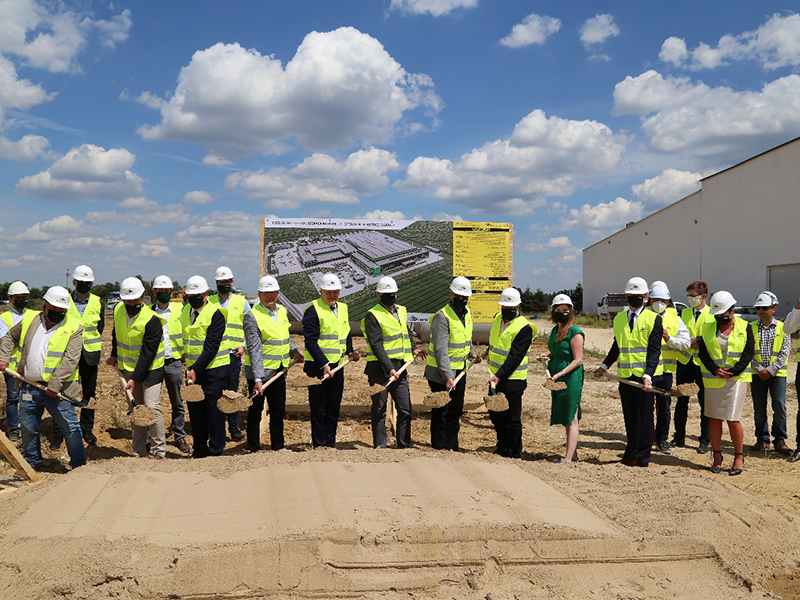 SÜDPACK bolsters its production capacities in the print sector

SÜDPACK is expanding the production plant at its site in Klobuck near Czestochowa, Poland. In an official ceremony marking the occasion on July 15, 2020, ground was broken for an extensive in-vestment at the site. A state-of-the-art complex is being built at the site of a company SÜDPACK acquired in 2015, Bahpol, which primarily specializes in flexo print. The new facility is expected to begin operating at the end of 2021.

Impressively underscoring its ambitious goals on the international front, SÜDPACK already set the course for its future, sustainable growth in the print sector, when it acquired the Poland-based company Bahpol. SÜDPACK has significantly increased its potential through Bahpol’s comprehensive expertise in flexo print, high production and product quality as well as certificates required for packaging finishing.
“Due to the constantly growing demand for our packaging solutions, expansion of the production capacities at this site is an important strate-gic step for us. At the same time, this forms the basis for serving the Eastern European market locally and responsively and enables sys-tematic development of the region,” explains SÜDPACK Managing Director Tharcisse Carl, who represented the Group’s management at the groundbreaking ceremony in Klobuck. In addition to other official representatives of SÜDPACK Ochsenhausen, the invited guests included District Administrator Henryk Kiepura, Mayor Jerzy Zakrzewski, the project managers of construction company MCM, and the local media.

The building is to be completed by the end of 2020, and production is scheduled to start by the end of 2021. The complex, which is equipped with the very latest technology, will provide sufficient space for the installation of further capacities. “Our plans include a new flexo printing as well as a laminating and slitting machine, meaning that our production will be not only very efficient but also state-of-the-art,” plant manager Achim Herter is happy to report. In prepared remarks as well as during a tour of the grounds, he regaled the guests and informed them about the extensive construction measures and the associated company objectives together with Slawomir Slomian, the commercial manag-er of SÜDPACK Klobuck.

It goes without saying that the building complex will be consistent with current environmental and energy standards after completion next year, which is very much in line with SÜDPACK’s holistic sustainability strategy.

Even thinner and yet recyclable: a complete range of films from a single source

SÜDPACK Medica at the Pharmapack 2023 in Paris